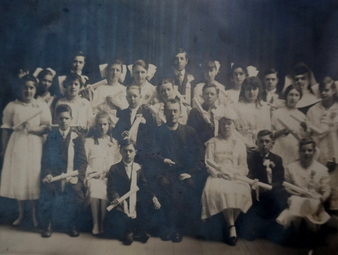 ​St. Francis de Sales School
In 1900, the old parish hall built by Father Sperlin in 1893 was adapted by Father Kunes for use as a school. In a letter from Holy Family Convent in
Manitowoc, Wisconsin, dated March 17, 1982, Sister Mary Theodoret recounted how the school came to be started: "My mother, Mrs. Napoleon Lalonde of  State Road, Manistique, who had come from Canada, was troubled that she had to send her children to the public schools. She did not let it rest at that, she got Mrs. Gorsche interested and the two of them canvassed the town seeking signatures to present to Father Kunes so he in turn would make an effort to get Sisters to staff the school. "From your files and ours you see that the long rectangular Hall built by Father Sperlin in 1893 was converted into a sixroom grade school. Father Kunes had written to Mother Alexia of Holy Family Convent, Manitowoc, Wis., and requested for Sisters to staff the school. Mother Alexia sent Sister Lucretia and companions to Manistique on Aug. 15, 1902 to take charge of the school.
It made way for the new brick school that was built in 1914. During the erection of the new school all the Catholic school students attended the public schools. "The city found out what it meant to have a Catholic school because that year the public schools were filled to capacity, some had to have half day sessions to accommodate all the students." In November 1901, Father Kunes wrote the Franciscan Sisters of Alverno, Wisconsin, to make a request for them to staff and operate the school. 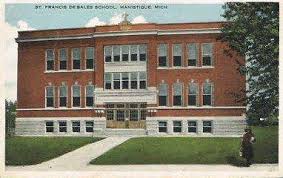 At the opening of St. Francis de Sales School, Sister Lucretia, two other teaching Sisters and a music Sister were sent to begin work with the lower grades. Their combined salary for the year was six hundred dollars. In 1905, a fourth Sister was sent and the combined salary raised to eight hundred dollars. In 1906, a fifth teacher was needed, so the music Sister was appointed to teach, though she continued to give a few music lessons. The salary for the group was now a thousand dollars, and for this sum the parish got a school with eight grades.
In 1907, the upper grades were taught in a building later occupied by Robert Curley's plumbing shop on the corner of Oak and Lake Streets.  Father Schevers began building a new, two-story school in 1914. It was a brick structure sixty by eighty feet, and cost $23,227, as evidenced by the pastor's
careful accounting.
Father Schevers spent four years planning the school, raising money for it and supervising the actual construction. It was dedicated on Columbus Day in 1915. School enrollment grew steadily. The Sisters were living upstairs over the school, and two basement rooms had to be brought into use as class rooms. The overcrowding was alleviated when a convent was completed in 1923. This second school served the parish for fifty-one years. 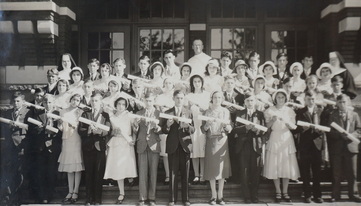 In 1965, the school needed remodeling to meet current standards. An additional, multi-purpose room was also needed. A firm estimated that remodelling the old building and adding a multi-purpose room would cost from $236,000 to $279,000 and building an entirely new plant would not cost a great deal more-$260,000 to $300,000.  For an ultimate cost of some $375,000, the parish built a school with eight classrooms, library, kitchen, conference room, principal's office and multi-purpose room.
On June 4, 1977, a Mass was celebrated to mark the 75th anniversary of St. Francis de Sales School. A special section focusing on the school was published by the Pioneer Tribune on June 2. It reported that more than 30,000 students had attended the school in its first 75 years.
In 2008, under the direction of Father Glenn Theoret, the old convent was demolished giving way to a new addition off the existing school.  This new addition now houses the middle school students (6th-8th grades), a science lab, two computer labs, and most of the school's specials program (i.e. art and computers).
The St. Francis de Sales Alumni Association has taken many forms over the years gaining and losing members.  Recently, in 2014 a small group of alumni began meeting to reinvigorate the association.  Today, the SFDS Alumni Association has a full governing board that meets monthly.  If interested in participating in SFDS Alumni Association meetings or events please contact the school at 906-341-5512.
© 2021 St. Francis de Sales School Alumni Association. All Rights Reserved.